A Tool for a Future

Yogurt is a fantastic food – it is nutritious, delicious and extremely convenient. For these reasons, it became one of the most popular foods in the Wold, where, every day, millions of yogurt containers are manufactured, most made of oil-derived plastic. These containers travel for hundreds or thousands of kilometres and need to be cold-stored, which translates in the release of tones of CO2 and the consumption of Gigawatts of energy that could, otherwise, be used for other nobler purposes. 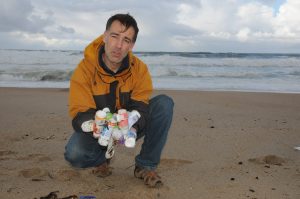 Have you ever noticed the high number of plastic containers that wash up on our beaches?

Certain plastic yogurt containers seem to have a tendency to escape recycling conveyor belts and become flotsam on our Oceans. Some, among them, would have incredible stories to tell, having travelled for decades, on Earths oceans!

These plastic containers will end, in the best of fortunes, in a recycling line, or, in the worst, as floatsam in the Earth’s oceans.

Floating plastic debris is, then,  ingested by fish, sea turtles, aquatic birds and marine mammals, which mistake it for food, causing the demise of millions of wild animals.

To make matters worse, under the effect of sunlight, floating plastic debris disintegrates in ever smaller particles, called microplastic, which end up being ingested by aquatic microorganisms, which feed on phytoplancton, thus entering our food chain, reaching our plate and our intestines.

We have a vision for the YogurtNest: we want to generate a positive impact on Planet Earth.

With the YogurtNest, when you make your own yogurt, at home, you’ll contribute to reduce the use of plastic containers and the release of millions of tones of CO2.

And because the YogurtNest was made to last for decades, it will work with you, for years and years, to generate a positive impact on Planet Earth!

Extracted from the cork oak tree, every 9 years or so, without hurting the tree or its longevity, cork is the YogurtNest’s “magic ingredient”.

Although the cork oak, Quercus suber, may be found from Portugal to Siberia’s Far East, high quality cork may only be harvested over here and in the Mediterranean Basin, having been used by Man, along millennia, to create a never-ending assortment of tools and implements.

Another particularity about the cork oak tree is its capacity to adapt to and thrive in poor soils and dry climates, creating lush ecosystems, providing food and shelter to a large variety of wildlife species.

Recent scientific studies indicate that, for each ton of cork that is harvested, 73 tons of CO2 are absorbed from the atmosphere by the montado ecosystem. This way, each YogurtNest represents about 110 Kg of carbon that were withdrawn from the Planet’s atmosphere.

In the past, dense cork oak forests covered large expanses of the Iberian Peninsula. Sadly, though, very little remains, from this once never-ending forest. You can, though, still find large areas occupied by another ecosystem where the cork oak reigns supreme: the Montado, known, in neighbouring Spain, as Dehesa.

It may come out as a surprise for many, that the Montado, one of the richest ecosystems in Europe – actually, one of Earth’s Biodiversity Hotspots, is a creation of the Human ingenuity. This agroforestry system has sustained itself for hundreds of years.

Sadly, though, even the Montado has lost large chunks of its original area, in recent decades, to accommodate cereal cultures, eucaliptus plantations and, more recently, real estate developments.

Many are the species that have been affected by the decline of these two ecosystems, in the Iberian Peninsula, but none as the Iberian lynx Lynx pardinus, the most threatened large cat species on Earth, that only survives thanks to the work of devoted biologists and a captive breeding program by Portugal and Spain.

We were the first Portuguese company to join the international 1% for the Planet programme, thus supporting Portuguese nature conservation projects.

We invite you to join us, on this adventure, and generate, with us, a positive impact on Planet Earth!